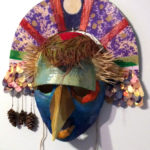 Gshkoziwin is an Anishnabe word meaning “Awaken the Imagination – Feel Wonder and Awe.” It was the name given by Indigenous Elder Ernestine Baldwin in response to viewing the Milkweed Collective’s Exploring Creativity in Depth® program.

I assisted in an apprenticeship project, by the Milkweed Collective, in training indigenous and non-indigenous artists in the creative imagination so that they may facilitate imagination programs for children and youth that incorporate First Nations and Metis arts, dance, music and traditional teachings.

Initially assigned to logistics, observation and documentation of the goings on only to find that full participation was essential.  I joined all ten candidates in a 12 week journey into the deep creative process led by non-indigenous elders Austin and Beverly Clarkson. The structure of the program was modeled after his university course during the 1980s and 1990s in the ‘Foundations of Creative Imagination’ but with the new addition of indigenous voices, cultural teachings and creative practices. There were weekly readings on the Truth and Reconciliation Commission Final Report, the history, traditions, and culture of First Nations, Metis and Inuit. Each week a guest presenter from the Aboriginal community would speak on a topic. As a group we worked and shared deeply our observations, experiences and reflections. It was an intimacy unlike any other that I have had the honour to share.

We danced, beat drums, prayed, drew pictures, worked with clay, shared, made masks, created regalia for our masks and performed a rite of passage. And we feasted.

The candidates then underwent an intensive training in the well validated, scripted creative imagination program known as Exploring Creativity in Depth® (ECiD). To the existing program First Nations and Metis cultural teachings were added. Practicums with school aged children followed.  Gshkoziwin programs are now being facilitated by the apprentices in their local community.